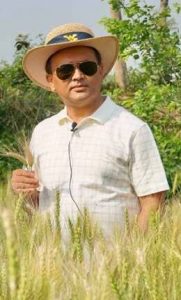 Dr. Md. Tofazzal Islam is a Professor of the Institute of Biotechnology and Genetic Engineering (IBGE) of Bangabandhu Sheikh Mujibur Rahman Agricultural University (BSMRAU), Bangladesh. He obtained B Sc Ag (Hon) and M Sc (Ag) in Agricultural Chemistry from the Bangladesh Agricultural University (BAU), securing First Position in the First Class in both cases in order of merit. He went to Japan as a Japanese government scholar and did MS (1999) and PhD (2002) at Hokkaido University with distinction. He joined Bangladesh Open University as a lecturer in 1994 and became an Assistant Professor (1997), Associate Professor (2004), and Professor (2010). On July 1, 2010, he joined BSMRAU as a Professor in the Department of Biotechnology. He led the Department of Biotechnology as Head, launched MS and Ph D programs, and established laboratories with state-of-art facilities from externally funded projects. He also served the BSMRAU as Director (International Affairs) and Director (Outreach).

In February 2016, a devastating plant disease was spotted for the first time in Bangladesh, which destroyed more than 15,000 hectares of wheat with yield loss up to 100%. Due to fear of that wheat killer, the Ministry of Agriculture instructed to clear the infected wheat field by burning the standing crops. Responding to that national crisis, Prof. Islam in collaboration with his British friend, Professor Sophien Kamoun of The Sainsbury Laboratory, coordinated and led more than 31 scientists from 7 countries of 4 continents and rapidly determined the genetic identity and origin of the wheat blast pathogen in Bangladesh by applying novel field pathogenomics and open data sharing approaches (www.wheatblast.net). The Discovery and leadership of Prof. Islam was news in more than 500 media across the globe including weekly Nature, Science, Science Daily and also in top national dailies and electronic media. Within 3 months of relentless work with world top-ranked researchers, Prof. Islam published their discoveries in a world famous flagship biology journal, BMC Biology (Islam et al., 2016, BMC Biology 14: 84). It was an unprecedented history in science that without spending any money from home country, a big puzzle in biology is resolved through the application of new genomics and open data sharing approaches. Open data sharing was previously practised only once in the USA for tackling the Zika virus. Recently, the deadly wheat blast is emerged in India (West Bengal) and reasonably the Indian researchers sought help from Prof. Islam. In recognition of his extraordinary leadership in the global scientific community and to mitigate the wheat disease in Bangladesh, South America, India, and beyond, recently, Prof. Islam and his British collaborators. They have started research on the development of durable blast-resistant wheat by using world latest CRISPR/Cas9 genome editing technology. He recently visited Kobe University and had a discussion meeting with a group of experts in blast research led by Prof. Yukio TOSA.

Dr. Islam was awarded many prizes and medals for his outstanding academic and research accomplishments in the field of biotechnology. His notable awards include Bangladesh Academy of Science Gold Medal & Award 2011 in Biological Sciences (Senior Group), Food & Agriculture Award 2011 from Oxfam, CSRL and GROW, University Grants Commission (UGC) Awards in 2004 and 2008, the Best Young Scientist Award 2003 from the Japan Society for Bioscience, Biotechnology and Agrochemistry (JSBBA), Chancellor’s Prize in 1995 and a Gold Medal in 2003 from BAU. He presented research findings and chaired sessions in many international conferences/symposia in the USA, the UK, Germany, Japan, Italy, Netherlands, Hong Kong, Norway, Malaysia, China, South Korea, Fiji, and Jamaica. He served as an international consultant in many organizations including the Secretariat of the Pacific Community (SPC) in Pacific Countries & Territories.

Dr. Islam worked as an Alexander von Humboldt fellow (2007-2009) at Georg-August-Universitaet Goettingen, Germany with Prof. Dr. Andreas von Tiedemann in the Division of Plant Pathology and Plant Protection. He has been awarded the Commonwealth Academic Staff Fellowship (March to May 2013) to work with Prof. Michele L. Clarke at the University of Nottingham, UK. He worked with Prof. Shinya Oba of Gifu University, Japan as a JSPS Invitation Fellow (June-July 2015). He is one of the most cited researchers (Researchgate score: 44.45 on December 12, 2021) in Bangladesh. Mitigation of wheat blast through international collaboration and application of advanced molecular biology and biotechnology is his major research mission in Bangladesh. Prof. Islam is the Chief Editor of two book series Bacillus and Agrobiotechnology, and CRISPR-Cas Methods published by Springer Nature.